Happy Diwali from our family to yours.... 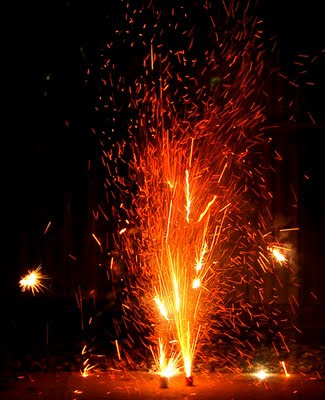 Although a little belated, here's wishing a very Happy Diwali to you and yours...

Diwali reminds me of the scheduling, planning and budgeting we used to do during our childhood days. We used to get a fixed amount to burn every Diwali. It used to money well burnt with a bang. These are some fond memories, something I used to look forward to every year, right until the early morning of Diwali day and leading into the grand finale a couple of days later.


Diwali was never a big auspicious day for me nor a big gift giving/exchanging occasion. The grandest part of Diwali was buying, hoarding and lighting of fire crackers. This was in addition to watching a family of business folks have a GRAND Diwali gala on the day of Laxmi puja. This used to happen a day (or two) after our Diwali day and it was always something to look forward to. They used to get all the cool pyrotechnics available at that time - Parachutes being one of them (don't remember what the others were called).......

As for our own collection of fire crackers, the planning used to start weeks in advance. With our allocated budget, we used to make long list of crackers we wish to buy for that Diwali....2 boxes of fuwaara, 2 boxes of chakri, 3 boxes of lavangi, 4 boxes of atom bombs (dang I'm sure this page will be indexed by FBI now) and above all 5-6 boxes of Volcano bombs. In addition to these, we also bough Taj Mahals and Laal Kilaas which were larger versions of lavangis that we used to separate out into individual tiny noise makers.

Once the list was prepared, we used to go to the local "Wholesaler" to purchase the items from our list. (There wasn't a Slickdeals or a Fatwallet to hunt for slick deals on fireworks). This used to happen at least a week or so before Diwali day. The guy was like a Sams Club of fire crackers. He used to have a lot of quantities but not a lot of varieties. So, after purchasing 60-70% of the items from him, we used to get the rest of my needs from other smaller shops.

On the eve of Diwali, there used to be the Diwali bath - Oil massage, very hot water, Uthne (some kind of scented soil) and lots of soap to remove the oil. Following the Diwali bath, we used to have our first round of fireworks....the tiny/puny stuff - the lavangis, chakris and fuvaaras - the ones that were visible but not very audible. This used to be a 3-4 hour affair starting around 9:00 PM and going all the way past midnight. Following this, the south indians amongst us used to go to bed for an early morning wake up call - the day of Diwali.

Diwali day used to start at 5:00 AM in the morning. This was the time for bringing out the big dogs - the atom bombs and volcanoes amongst other smaller sound makers. They used to be really loud. With at least 4-5 for us lighting the fireworks, it used to make quite some sound. I don't remember anyone complaining about noise pollution those days. Come to think of it, it used to be really loud, hardly anyone had any A/C or associated sound insulation and it used to be way early in ther morning. If someone does that to me now, I'll probably be out there with a shotgun giving them an ultimatum. Back on topic, the morning phase of the blow out used to last at least 4-5 hours. By the end of it all, the whole place used to be filled with burnt paper and smell of smoke that gave me sore throat for at least a couple of days. But, it was a WHOLE LOT of fun!

The Grand finale used to be the fireworks (and monetary) display by the business families. This used to be the night after Diwali. Around 9:00 PM is when the fun started and we gathered around them watching them light all the cool stuff. Climax to their fireworks display always used to be this 200 feet long garland of firecrackers that once lit took probably around 10 minutes to finish off. We used to rig them with atom bombs and volcano bombs at every 20 feet or so to enhance the sound effects.

Fast forward 25 years, here I am now, lighting these fuvaaras with utmost caution, being a role model for my kids and explaining them the dangers of playing with fire. Lighting any of those atom bombs or volcanoes is out of question. Cops will probably at my door after the first loud thing I light out on our porch. Diwali these days is mostly a non-event. We have a small pooja at home and if time permits, we visit the temple that weekend (We didn't this year). Fireworks are usually purchased months in advance, usually a week before the July 4th weekend. In fact half of the the ones we lit this year were purchased a year back.