Life is a series of left turns...

WTF?  2 out of 10 turns are left turns? 3 of them with stoplights! One might think I'm going round in circles!

The good thing?? Well, my way back is a series of right turns with a couple of lefts (without stoplights) sprinkled in between. If I measure the time, it probably takes me 25% more time to go than to come back!
at 3:28 PM No comments:

A bad workman blames his tools

No updates on the repair job yet. Just a pile of tools, bad caps and more tools taking up space on one corner of a table....
at 8:11 PM No comments:

Cheapo parts not a good job do

The stupid 4 dollar soldering iron won't get hot enough to melt the solder. I paid a dollar for the iron and 3 bucks for shipping. No point going around the hassle of returning it either.

RadioShack came to the rescue. I've never been a RadioShack fan but this was the second time it proved to be very useful.

A couple of months back, the Microwave went kaput. After opening it out and checking some of the circuits, it seemed that the internal fuse might have blown. I wasn't sure but it was worth replacing before spending a hundred bucks on a service call to a repairman. Checked online, the fuse was at least 10 - 15 bucks shipped. Tried my luck at RadioShack - 3 for $2!!. Yaaay....replace...see if it works...rinse...repeat 3 times. It worked on the first try. The microwave has been working fine ever since. Hundred bucks saved - thank you RadioShack!

Fast Forward to yesterday. Went to RadioShack, found a decent 30W soldering iron + starter kit (some solder wire, stand, etc.) for 8 bucks! Made me kick myself for wasting time and money ordering online before checking at RadioShack (2 mins from my house)

The project still is facing hurdles. I was able to easily remove the bad caps with the RadioShack iron....but the solder in the holes won't come out. My noobiness is shining very bright. I've already tried a couple of times - spend around 2 hours an successfully cleared out enough holes to put in half a capacitor.

Good news? No burns yet - no fingers burnt, no table burned, no house on fire either.

From the various things I had set out to do, these are the one's I'm doing and the once I aint...

- Drink more water - try to keep track of qty drunk - Target: 1 gallon/day
>>> I have upped my water intake for the most part. Not consistently though. Also I'm not tracking my consumption so cannot say how close I am to hitting the gallon a day mark. I'm probably close to 1/2 gal/day

- STOP late night snacking
>>>> Been successful at doing this for the most part. Some nights are bad but those are rare.

- Build an exercise routine - at least 3-4 days a week - cardio, weights
>>>> Failed miserably at doing this. I must say I did not attempt this with any effort at all. This is definitely something I should start soon.

- Exercise portion control and attempt to consistently count calories - plan on using caloriecount.about.com
>>>> Been doing very good at portion control both at lunch and dinner without ever starving myself. Water intake before meal, whole wheat bread, fruits, etc. are some of the things that are helping this.

I have not been using caloriecount...but I'm pretty sure I've been within 2000 cals most of the days.

- Sleep at least 6 hrs/night
>>>> Weekly average of 6 hours is being met but not on a daily basis.

- Weigh in every Friday and monitor the weight gain/reduction on a weekly basis
>>>> Been doing this every Friday morning. Three weeks later, I am tracking at 189-190 lbs. I have lost 3-4 lbs over the last 3 weeks, which is in line with my target of a pound a week.


However, these initial pounds that I've been losing are the easy on, easy off ones. They were more of a bloat due to bad habits over the last few months as opposed to gradually gained over a few years. After I lose another couple of pounds, I know it would get harder and I will have to add exercise to the mix. So I better start working on it now!
at 10:19 AM No comments:

To solder or not to solder....

I think I have answered the question

Over the weekend....
- I found the stock VGA card that came with the desktop.
- It doesn't even support any widescreen resolution or any std resolution beyond 1280 * 1024
- At 1280 * 1024, you can literally see the screen refreshing when you switch windows
- Anything graphicky runs yucky and puky with the stock VGA card
- I found yet another graphics card (FX 5200) that had a couple of popped capacitors
- I noticed that all the popped capacitors on FX 5200 as well as the 7600GS were of the same ratings
- Figured even if I manage to fix one of them, I would be in good shape
- I also figured I must have spent around 150-200 bucks between these two graphics cards (Dang! PC Gaming is expensive!!) 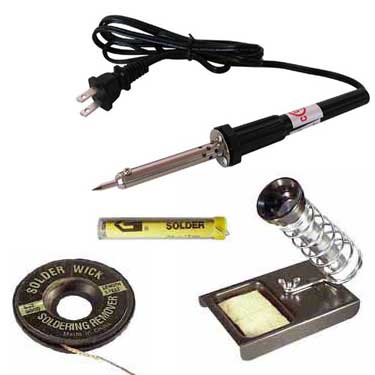 - I also figured that it's way way way cheaper than replacing the 6 year old desktop (Just looked it up, purchase date: 8/23/2004) that still continues to function and perform like new


What would be the outcome? One (or more) of these should/would/could happen...

I have a Dell SC400 as my primary desktop. It is old, outdated, relatively slow, but a the same time, it has been one of the most stable desktops I've ever had. I've owned it for 6 years now and it has never given me any problems. It has been upgraded over time with more RAM, Hard Drive capacity and Video Card. I have been contemplating upgrading but have never been compelled enough since the stability of this desktop more than made up for it's lack of speed and processing power.

It was working fine until a couple of days back. Today, I turn it on and nothing comes up.

I don't get a BIOS check complete beep either. It's not completing the POST.

Did the initial pushing and pulling of wires but no luck.

After opening it up, I hear two very feeble beeps a few seconds after turning on....unsure whether it's coming from the motherboard or the VGA card.

I suspected the RAM first so I uplugged the DIMMs one at a time to see if any of those had gone bad but no luck.

I finally unplugged the video card and here's what I found.... 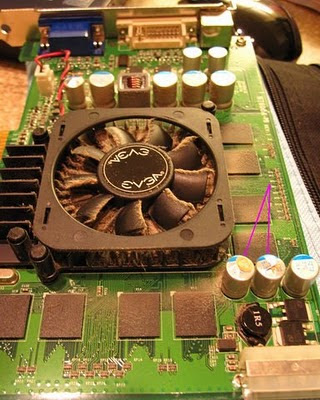 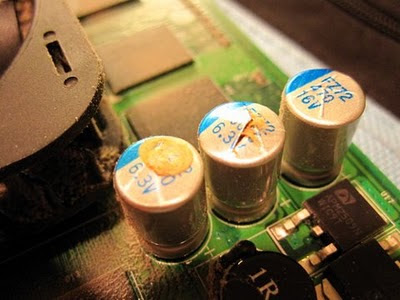 Seems to me like the two capacitors are toast. I don't have the inclination to go buy a couple of capacitors, a soldering iron, solder wire, unsolder the bad capacitors, solder the new ones, etc. etc.

I think I have a old base VGA card somewhere. Will hunt for it in the morning and plug it in to make sure that is actually the problem.

Ironically, I had bought an external hard drive a couple of weeks back to backup the data on this PC. Never got around to actually backing it up!