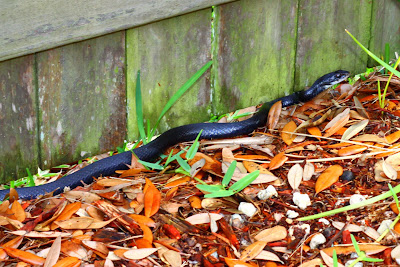 Found this snake in our backyard the other day. Although, supposedly, it's very common to see snakes around here, this was the first time I saw one and I was quite startled.

I was in my own world doing some yard work that I did not even notice this guy at first. I was probably around 3-4 feet from him; it was probably a good thing I did not see him then or I might have screamed like a girl. I actually saw him a few mins later when I was walking back with a trash bag. There he was relaxing in the sun, all 5 ft of him, probably had come for some frog for dinner (which we see quite a few of in the backyard).

What did I do? I ran back in to grab my camera to snap some pics of this little guy. I just had my 50mm and I did not bother to change it. I hurriedly came back but he was no longer in his original position. He was ready to go hunting or find a place without a hyper-excited snake noob disturbing his beauty bask. I manged to get a couple of pics before he was all gone. It was not in the best angle - mind you I was scared and did not want to get too close to this guy nor did I have a zoom lens on.

Once I got back in, I tried to identify the type of snake - What's the first question that comes to mind? Yeah, is/was it poisonous? What's the next one -- Does it bite? Duh, yeah it would bite, but I was also aware that most of the snakes found in the urban areas are the non-venomous types. There are some pretty good resources online to help identify the species of a snake. I used this site to help I identify my new-found friend - http://www.flmnh.ufl.edu/herpetology/fl-guide/snakekey.htm

From what I could tell based on this pic and the questionnaire on that site, it was a Southern black racer. I was probably right, it was visiting ys to feast on some of the frogs that we have been seeing a lot of. More info on the racer here